Win at Monopoly
To win monopoly, you need to bankrupt all of your opponents before they can do the same to you. With each decision you make, it’s essential to consider the best ways to improve your chances and beat the competition. While luck is a factor in winning Monopoly, fortune can be fickle – easily turning against you when your guard is down. You can learn how to craft the smartest strategy to maximize your opportunities and give yourself a chance to win.

1. Learn about the most common dice rolls 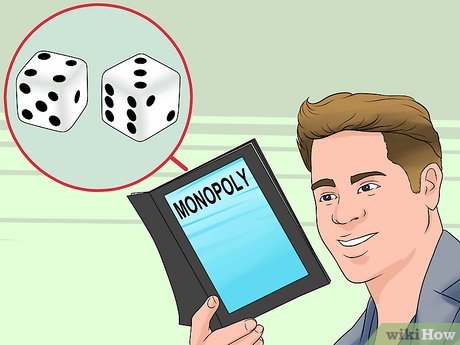 Learn about the most common dice rolls. While you probably don’t need to get into blackjack territory, statistically speaking, it’s good to learn a little bit about your probability of landing on particular spaces, rolling particular numbers, and the likelihood of landing on a given property.

With the most possibilities of dice combinations, 7 is the most common roll on any given turn, and 2 and 12 are the least probable.

2. Be aware of the least and most landed-upon properties

Be aware of the least and most landed-upon properties. Mediterranean Avenue and Baltic Avenue are the least-landed-upon properties, while the orange properties (St. James Place, NY Avenue, and Tennessee Ave.) are the most, due to their proximity to Jail, making them the most lucrative monopoly in the game. Acquiring the orange monopoly gives you a very high probability of winning.
The single square most landed-upon in the game is Jail, while the single property most landed-upon is Illinois Ave, followed by the B&O Railroad. A hotel on Illinois gives you the most income for a single space, after a hotel on Boardwalk.

3. Keep in mind that you will have a higher chance of drawing certain cards

Keep in mind that you will have a higher chance of drawing certain cards. It is a good idea to keep track of the cards that you and your opponents play during the game so you can anticipate what you might draw if you land on a Chance or Community Chest space. Spend some time with the cards before you play to learn what sorts of outcomes might be thrust upon you. Each standard monopoly set includes:

Sixteen Chance cards. The odds are high that a chance card will move you to another place, since ten out of sixteen chance cards require you to do so. Additionally, there are two rewards cards which give you money, two penalty cards which take money away, a card that takes away money from building owners and one get out of jail free card.

4. Play by the standard rules

Play by the standard rules. While some players like to play a kind of custom version of Monopoly, changing certain rules gives you less control over the outcome of the game and can prolong it as well. Play the traditional Parker Brothers rules for the game to give yourself the best possibility of winning.
For example, don’t make “Free Parking” a bonus square and don’t make immunity part of any trade.

Part 2 of 4: Buying and Building To Win

1. Buy as many properties as you can as soon as possible 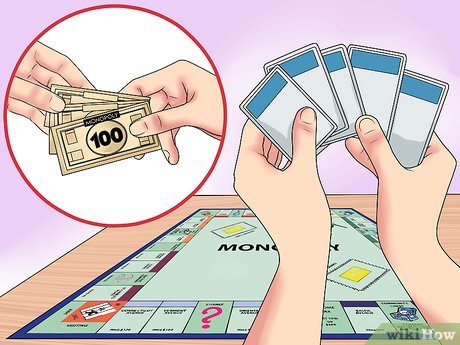 Don’t wait until you’ve got more money, or until you’ve landed on Boardwalk or other prestigious properties to start spending money. Start buying whatever open property you land on as soon as possible. The more you own, the better your standing in the game. There’s little incentive in Monopoly to play conservatively and wait.

You’ll start making money after you have property, not before. Don’t worry about spending all of your money in the early turns. That just means you’re playing smart.

Create monopolies. Don’t leave a bunch of open spaces in a color group for others to buy. Buy them yourself if you can. In general, you should always buy unowned properties if no other player owns property in that color group, especially if it gives you a second or third property in a given group, building you closer to a monopoly. The orange properties, in particular, are the most landed-upon, making them the most desirable monopoly.
You have a monopoly when you own all of the properties of one color. The holder of a monopoly is entitled to double the rental rate normally paid. The monopoly holder is also entitled to add houses/hotels (which substantially increases rental rates). Holding a monopoly also greatly enhances your bargaining power during property trades made at later times in the game.

3. Buy properties that other players want

Buy properties that other players want. It can also be advantageous to purchase properties to block other players from creating monopolies, opening you up for trade possibilities later in the game. If you see an opponent working towards a particular monopoly, take any opportunity that you get to buy the properties they want.

Don’t worry about blocking a monopoly when two players each own a property of a group. They’re already blocking each other, meaning you’d be better off placing your attention elsewhere.
Use the advantage that you gain from buying a property that another player wants to get something that you want. For example, if the other player has a property (or two) that you want, propose a trade.

4. Develop a strategy for railroads and utilities

Develop a strategy for railroads and utilities. In general, the railroad spaces are more valuable than the utility spaces, which offer little in the way of long-term investment. Railroads, though, are only valuable if you own all of them. Some players make acquiring all the Railroads a priority, while some prefer ignoring it as a distraction. Whatever you choose to do, stick with your policy.

There’s only a 1 in 38 chance of profiting from a Utilities purchase, meaning you would be better off investing in hotels and other building projects because they will make you more money.

Sometimes it might be a good idea to purchase a Railroad to keep another player from having a railroad monopoly.

5. Get three houses as quickly as possible

Get three houses as quickly as possible. As soon as you get a monopoly, start building, and don’t stop building until you’ve got three houses on each property. You will make far more money after you get up to three houses per property. This extra income will increase your chances of winning the game.
Build houses when you have enough cash for a “high probability” expense such as rents on railroads and utilities, luxury tax and certain Community Chest cards. If possible, wait until you pass the part of the board where there is the highest likelihood of paying the highest penalties, the last few squares of the game before Go.

6. Try to cause a housing shortage

Try to cause a housing shortage. When you have only three or four low-rent color groups, you should put three or four houses on each property to restrict the availability of houses to owners of high rent color groups. Don’t move up to a hotel if returning houses to the bank would enable your opponent to develop an expensive color group. It’s devious, and effective.

1. Get the most out of your mortgages 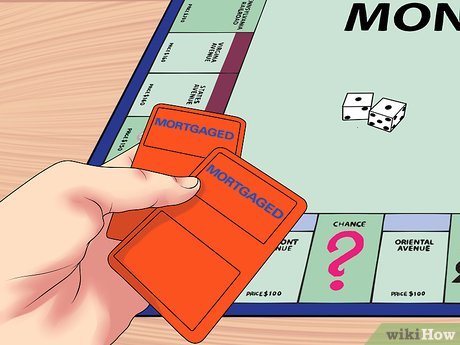 Get the most out of your mortgages. Mortgaging allows you to raise capital at crucial points in the game. However, keep in mind that it will cost more to lift the mortgages on one of your properties than the total amount raised from mortgaging it in the first place, so don’t bother. Keep in mind the following when mortgaging your property:

Single properties should be mortgaged first. Don’t mortgage a property from a group where you own 2 or more properties unless it’s absolutely necessary.
If you need to raise money, mortgage single properties if it allows you to own a color group of at least three houses per property (or hotels in the Light Blues or Purple group).
As you cannot collect rent once a property is mortgaged, try not to mortgage those properties that players land on frequently or get higher-than-average rents from landers.

Evaluate trades carefully. Pay attention to your fellow players’ preferences for particular properties and try to use that knowledge to your advantage. Trying to trade for a full line of colored properties is good, as it allows for building expansions. However, you want to avoid trading down for these color sets. For example, while gaining all of the pink properties in a trade may be good, it may not be wise if the trade enables another player to own all of the orange properties. You will likely pay more in rent to the owner of the orange properties.

Before you make a deal, decide whether or not it will be advantageous to you in the future. Always ask yourself, what will this do for me in the long run, and how will this trade help me bankrupt my opponents?
A good rule of thumb is to only trade to give yourself a monopoly, or to give yourself more monopoly than your opponent.

3. Consider staying in jail later in the game

Consider staying in jail later in the game. In Monopoly, unlike in real life, being in jail is not always a bad thing. Early in the game, before you have a monopoly, you should pay the $50 to get out of jail so you can continue purchasing properties. However, later in the game, if most of the properties are owned or if most of the properties between the Jail and Go to Jail spaces are developed, simply roll the dice and stay in jail until you roll the required number to get out. This can be a welcome alternative to paying rent for landing on other players’ properties.

Finish off struggling players. Monopoly has a reputation for often dragging out into games that last several hours or several days, but it doesn’t necessarily need to be so. As soon as most of the property has been bought up, it’s a good idea to start the bargaining process, and attempt to convince players in less advantageous positions to forfeit their properties and concede the game. Put those properties back into play and open the game back up to the players in better position to win.
If a player is blocking monopolies and is unwilling to trade properties, consider calling it a draw and starting a new game. In this situation, you could spend days trading money back and forth without making much progress.

1. Gang up on strong players 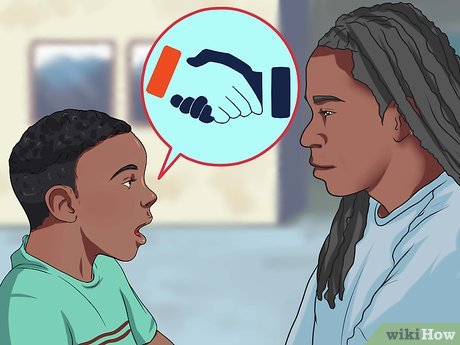