Win at Tic Tac Toe
Tic Tac Toe—it’s so simple, yet endlessly entertaining. But did you know that there’s a mathematically proven strategy to follow that can help you win, or at least draw, every time you play? That’s right; you never have to lose a game of Tic Tac Toe again, and we’ll teach you exactly how. Keep reading to learn how to always win at Tic Tac Toe using a foolproof strategy.

Method 1 of 3: Winning or Drawing when Playing First

1. Play your first X in a corner 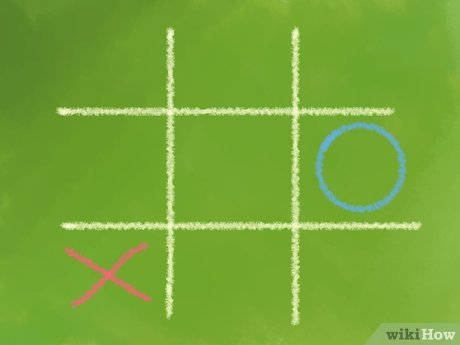 Play your first X in a corner. Most experienced tic tac toe players put the first “X” in a corner when they get to play first. This gives the opponent the most opportunities to make a mistake. If your opponent responds by putting an O anywhere besides the center, you can guarantee a win.
In this example, you are going first, and using X as your symbol. Your opponent goes second, and uses O.

2. Try to win if your opponent plays the first O in the center

Try to win if your opponent plays the first O in the center. If your opponent plays their first O in the center, you have to wait for them to make a mistake before you can win. If they continue to play correctly, they can guarantee a tie. Here are your two options for your second move, followed by instructions on how to win if they make certain moves (if they don’t, just keep blocking their plays and the game will be a tie):

Place your second X in the opposite corner from your first, so there’s a line going “X O X” diagonally across the board. If they respond with an O in one of the other corners, you can win! Place your third X in the last empty corner, and your opponent won’t be able to block you from winning with your fourth X.

Or, place your second X on an edge square (not a corner), not touching your first X. If your opponent puts down an O in the corner that’s not next to your X, you can use your third X to block their move and automatically win with your fourth X

4. Place your third X so you have two possible winning moves 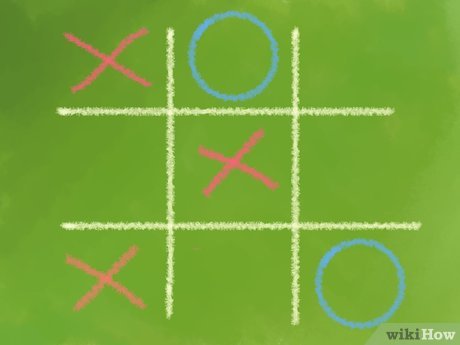 Place your third X so you have two possible winning moves. Most of the time, your opponent will see that you have two X’s in a row and block you. (If not, just win by making a row of three X’s.) After this happens, there should be an empty square that is in line with both your first and your second X, with no enemy O’s blocking that line. Put your third X in this square.
For example, take a piece of paper and draw a tic tac toe board with the top row “X O _”, the middle row “O _ _,” and the bottom row “X _ _.” If you place your third X in the bottom right corner, it’s in line with both of your other X’s.

5. Win with your fourth X 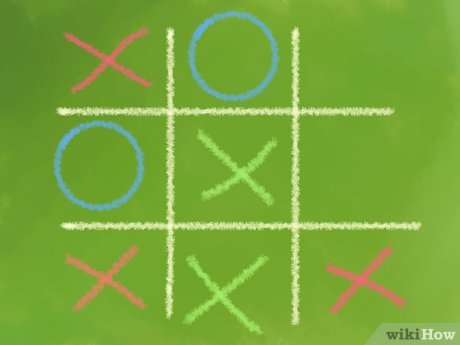 Win with your fourth X. After your third X, there are two empty squares that will win you the game if an X goes into one of them. Since your opponent can only make one move, he can only block one of those squares. Write your fourth X into the square he didn’t block, and you’ve won the game!

1. Force a draw if the opponent starts in the corner 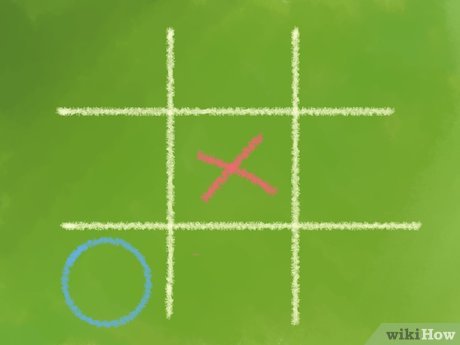 Force a draw if the opponent starts in the corner. If the opponent plays first and starts with an O in a corner, always put your first X in the center. Your second X should be placed on an edge, not a corner, unless you need to block your opponent from getting three in a row. Using this strategy, every game should be a draw. Theoretically, you can win from this position, but your opponent would have to make a huge mistake, such as not seeing that you have two X’s in a row.
In this section, your opponent is still playing O’s, but remember they get to play first this time.

2. Force a draw when the opponent starts in the center

3. Try to win if the opponent starts at the edge

Try to win if the opponent starts at the edge. Most of the time, your opponent will start with one of the moves above. However, if your opponent puts down the first O on an edge, not on a corner or center, you have a small chance to win. Put your first X in the center. If your opponent puts the second O on the opposite edge, making a row or column that reads O-X-O, put your second X in a corner. Then, if your opponent puts the third O in the edge that is adjacent to your X, making a line that reads O-X-O, put your third X in the empty square to block their row of two O’s. From here, you can always win with your fourth X.
If at any point, your opponent doesn’t make the exact move described above, you’ll have to settle for a draw. Just start blocking their moves and neither of you will win.

1. Try these out if your tic tac toe games always end in draws 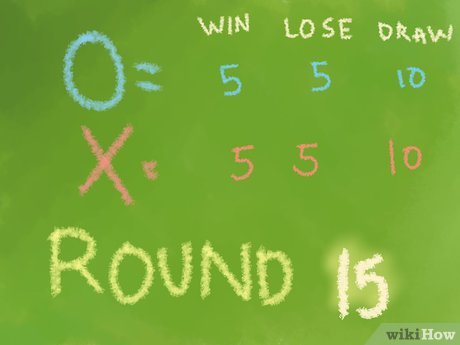 Try these out if your tic tac toe games always end in draws. It might be fun for a while to be unbeatable at tic tac toe, but even without this article your friends might figure out how to stop you from winning. Once that happens, every single game of tic tac toe you play with them will be a draw — ugh. But you can still use basic tic tac toe rules to play games that aren’t as easily solved. Try them out below.

Play mental tic tac toe. The rules are exactly the same as tic tac toe, but there’s no board! Instead, each player says their moves aloud, and pictures the board in their head. You can still use all the strategy advice in this article, but it can be difficult to concentrate on that when you’re trying to remember where the X’s and O’s are.
Agree on a system for describing moves. For instance the first word is the row (top, middle, or bottom) and the second word is the column (left, middle, or right).

3 Play 3D tic tac toe
Play 3D tic tac toe. Draw three tic tac toe boards on separate pieces of paper. Label one board “top,” another “middle,” and the third board “bottom.” You can play anywhere on these boards, and they work as though they were stacked on top of each other to make a cube. For instance, taking the center on all three boards wins you the game, since it makes a line standing vertical through the cube. Getting three in a row on any single board also wins. See if you can figure out how to win with a diagonal line across all three boards.
For a real challenge, combine this with the last variation and try mental 3D tic tac toe. The first word is the board (top, middle, or bottom), the second word is the row (top, middle, or bottom), and the third word is the column (left, middle, or right).

4 Play five in a row
Play five in a row. Play this game, sometimes called Gomoku, on a piece of graph paper, without even having to draw a board. Instead of marking X’s and O’s inside the squares, write them at the intersections where the graph paper lines meet. You can make each move anywhere on the graph paper. The first player to get exactly five in a row (not six or more) wins the game. This game is surprisingly complicated, despite its similarity to tic tac toe, and even has world championship tournaments.
In tournaments, players use a 15×15 or a 19×19 board, but you can use any size of graph paper for this game. You could even play on an infinite board, taping on more graph paper whenever you need to.