Assess Statistical Significance
Hypothesis testing is guided by statistical analysis. Statistical significance is calculated using a p-value, which tells you the probability of your result being observed, given that a certain statement (the null hypothesis) is true. If this p-value is less than the significance level set (usually 0.05), the experimenter can assume that the null hypothesis is false and accept the alternative hypothesis. Using a simple t-test, you can calculate a p-value and determine significance between two different groups of a dataset.

Part 1 of 3:Setting up Your Experiment 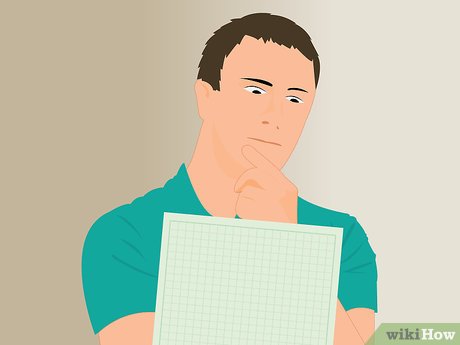 Define your hypotheses. The first step in assessing statistical significance is defining the question you want to answer and stating your hypothesis. The hypothesis is a statement about your experimental data and the differences that may be occurring in the population. For any experiment, there is both a null and an alternative hypothesis. Generally, you will be comparing two groups to see if they are the same or different.

2. Set the significance level to determine how unusual your data must be before it can be considered significant 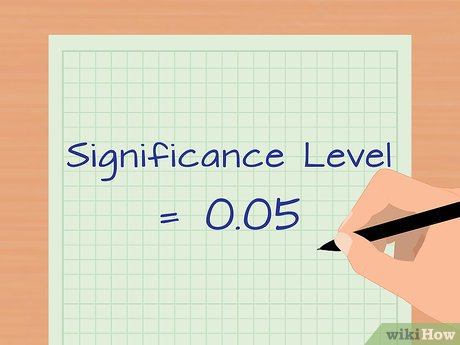 As a general rule, the significance level (or alpha) is commonly set to 0.05, meaning that the probability of observing the differences seen in your data by chance is just 5%.
A higher confidence level (and, thus, a lower p-value) means the results are more significant.
If you want higher confidence in your data, set the p-value lower to 0.01. Lower p-values are generally used in manufacturing when detecting flaws in products. It is very important to have high confidence that every part will work exactly as it is supposed to.
For most hypothesis-driven experiments, a significance level of 0.05 is acceptable.

3. Decide to use a one-tailed or two-tailed test 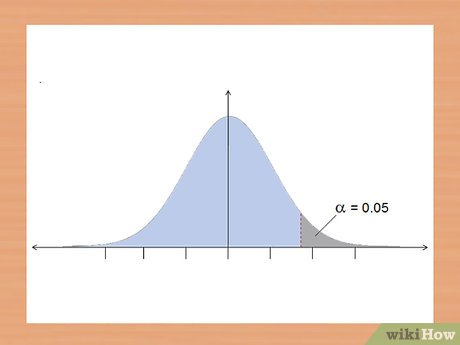 Decide to use a one-tailed or two-tailed test. One of the assumptions a t-test makes is that your data is distributed normally. A normal distribution of data forms a bell curve with the majority of the samples falling in the middle. The t-test is a mathematical test to see if your data falls outside of the normal distribution, either above or below, in the “tails” of the curve. 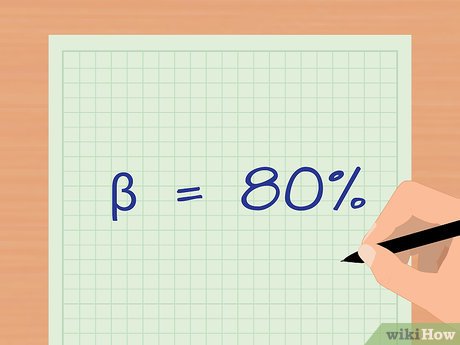 Determine sample size with a power analysis. The power of a test is the probability of observing the expected result, given a specific sample size. The common threshold for power (or β) is 80%. A power analysis can be a bit tricky without some preliminary data, as you need some information about your expected means between each group and their standard deviations. Use a power analysis calculator online to determine the optimal sample size for your data.

Researchers usually do a small pilot study to inform their power analysis and determine the sample size needed for a larger, comprehensive study.
If you do not have the means to do a complex pilot study, make some estimations about possible means based on reading the literature and studies that other individuals may have performed. This will give you a good place to start for sample size.

Part 2 of 3:Calculating the Standard Deviation

1. Define the formula for standard deviation 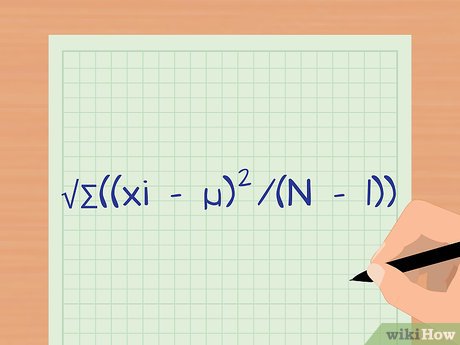 Define the formula for standard deviation. The standard deviation is a measure of how spread out your data is. It gives you information on how similar each data point is within your sample, which helps you determine if the data is significant. At first glance, the equation may seem a bit complicated, but these steps will walk you through the process of the calculation. The formula is s = √∑((xi – µ)/(N – 1)).

s is the standard deviation.
∑ indicates that you will sum all of the sample values collected.
xi represents each individual value from your data.
µ is the average (or mean) of your data for each group.
N is the total sample number.

2. Average the samples in each group 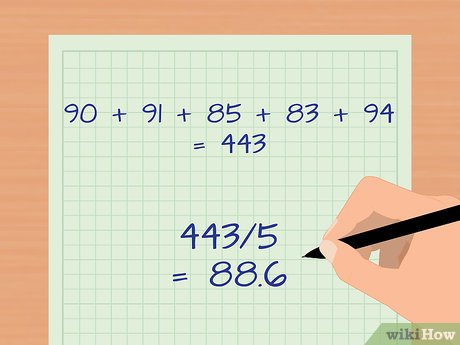 Average the samples in each group. To calculate the standard deviation, first you must take the average of the samples in the individual groups. The average is designated with the Greek letter mu or µ. To do this, simply add each sample together and then divide by the total number of samples.

3. Subtract each sample from the average 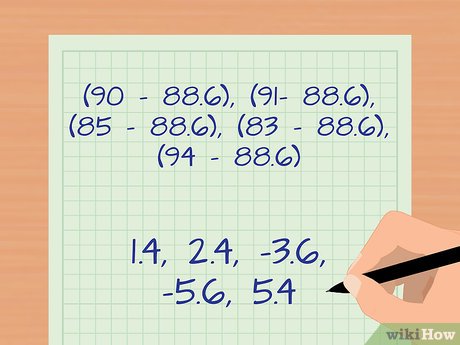 4. Square each of these numbers and add them together 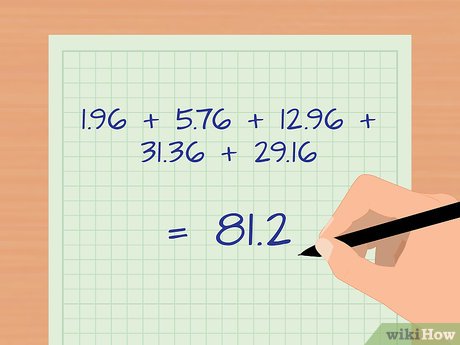 Square each of these numbers and add them together. Each of the new numbers you have just calculated will now be squared. This step will also take care of any negative signs. If you have a negative sign after this step or at the end of your calculation, you may have forgotten this step.

5. Divide by the total sample number minus 1 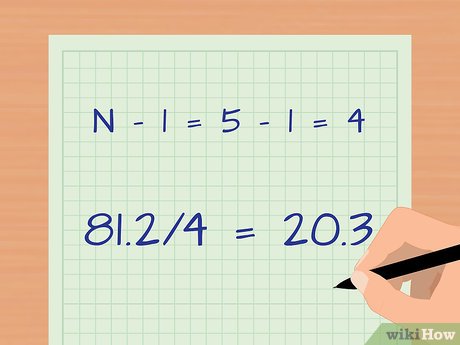 Divide by the total sample number minus 1. The formula divides by N – 1 because it is correcting for the fact that you haven’t counted an entire population; you are taking a sample of the population of all students to make an estimation. 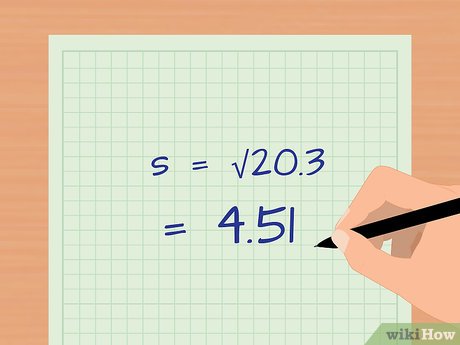 Take the square root. Once you have divided by the sample number minus one, take the square root of this final number. This is the last step in calculating the standard deviation. There are statistical programs that will do this calculation for you after inputting the raw data.
For our example, the standard deviation of the final grades of students who read before class is: s =√20.3 = 4.51.

1. Calculate the variance between your 2 sample groups 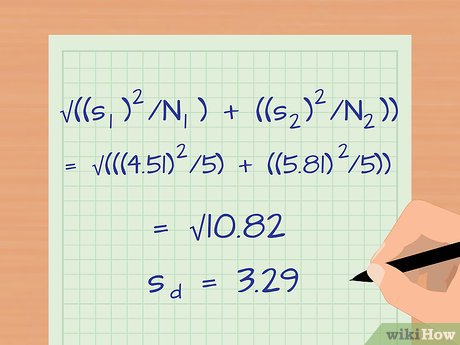 2. Calculate the t-score of your data 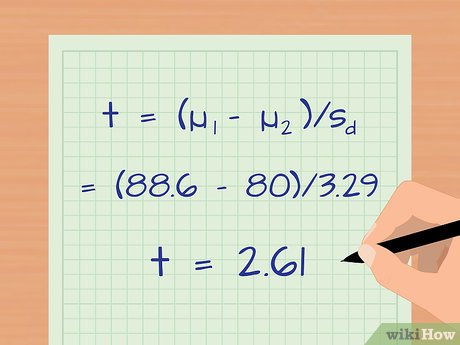 Calculate the t-score of your data. A t-score allows you to convert your data into a form that allows you to compare it to other data. T-scores allow you to perform a t-test that lets you calculate the probability of two groups being significantly different from each other. The formula for a t-score is: t = (µ1 – µ2)/sd.

3. Determine the degrees of freedom of your sample 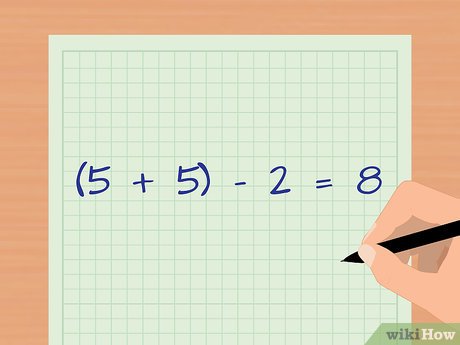 4. Use a t table to evaluate significance 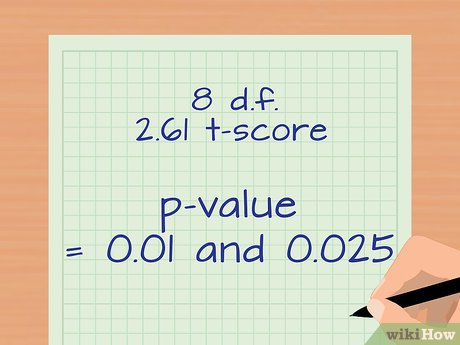 Use a t table to evaluate significance. A table of t-scores and degrees of freedom can be found in a standard statistics book or online. Look at the row containing the degrees of freedom for your data and find the p-value that corresponds to your t-score.
With 8 d.f. and a t-score of 2.61, the p-value for a one-tailed test falls between 0.01 and 0.025. Because we set our significance level less than or equal to 0.05, our data is statistically significant. With this data, we reject the null hypothesis and accept the alternative hypothesis: students who read the material before class get better final grades. 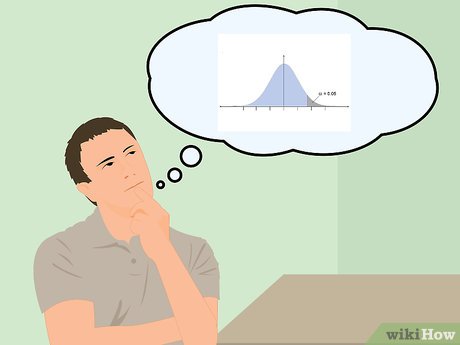 Consider a follow up study. Many researchers do a small pilot study with a few measurements to help them understand how to design a larger study. Doing another study, with more measurements, will help increase your confidence about your conclusion.
A follow-up study can help you determine if any of your conclusions contained type I error (observing a difference when there isn’t one, or false rejection of the null hypothesis) or type II error (failure to observe a difference when there is one, or false acceptance of the null hypothesis).